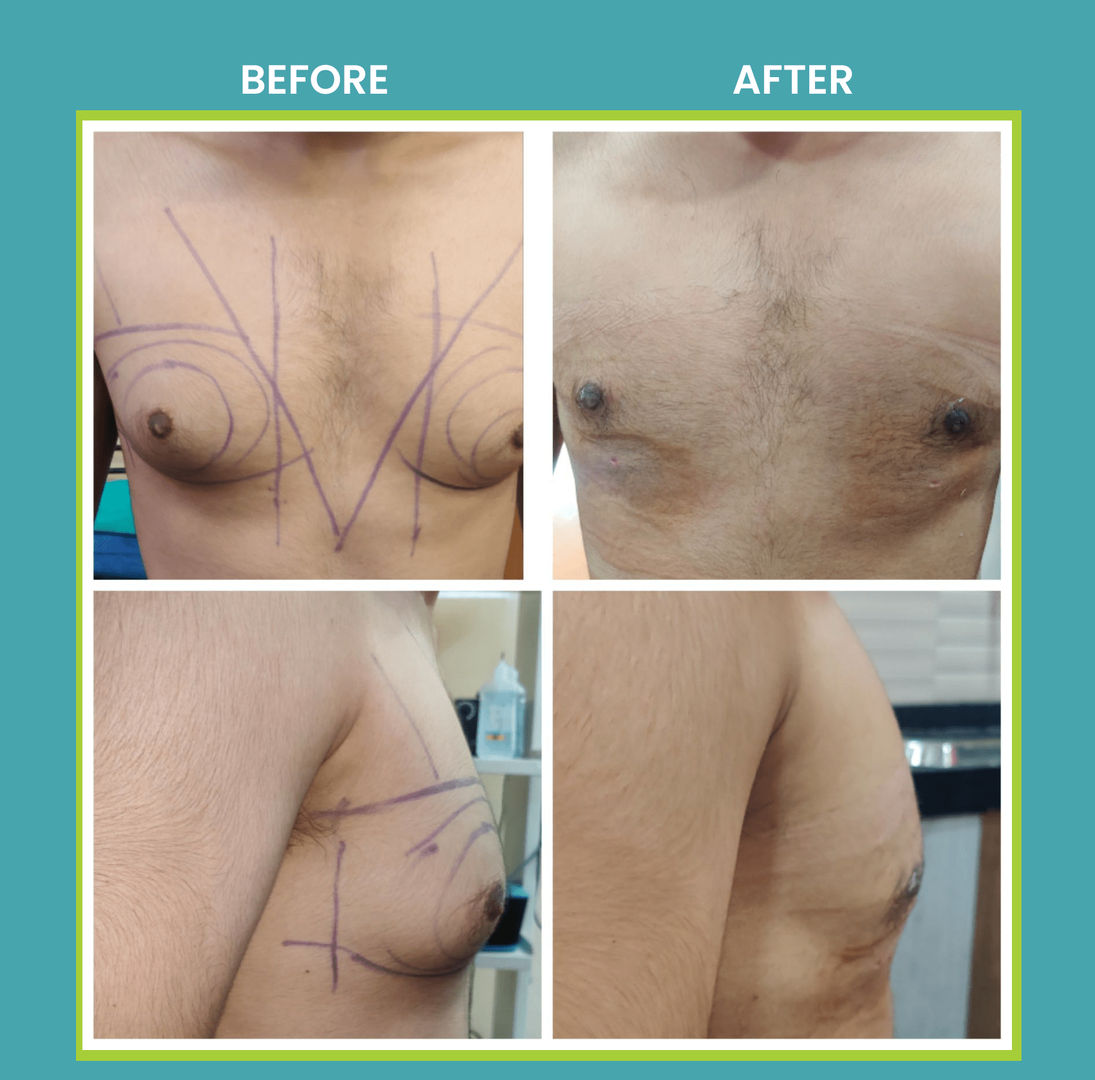 Details of the Patient

Symptoms shown by the Patient

An Overview of the Case

Gynecomastia is a condition that causes enlargement of the male breast tissue. It can affect men of all ages, but it is most common in newborns, adolescence, and later adulthood. Gynecomastia can be caused by various factors, the most prevalent of which is a hormonal imbalance between testosterone and oestrogen.

Some men may not desire or require gynecomastia treatment. If medicine or other substance is causing the breasts to expand, they may need to stop using it or switch to another. If the cause is a disease, the swelling should subside as the condition is treated.

Gynecomastia surgery is an option for some men. A plastic surgeon removes breast tissue to make the breasts smaller during this procedure.

VASER liposuction (Vibration Amplification of Sound Energy) is a cutting-edge fat-removal process that is a safe alternative to standard liposuction. It employs an ultrasonic technology that emulsifies and eliminates fat using an inaudible sound wave. Because this procedure targets fat, it has a low risk of bruising and scarring because no surrounding tissue is damaged.

Breast gland tissue may need to be removed in some patients. Dr. Deepesh Goyal, one of the best plastic surgeon in Jaipur, usually combines VASER Ultrasonic Liposuction with gland excision in gynecomastia surgery because this cannot be treated by liposuction alone. Rejuvena Cosmo Care is the first plastic surgery clinic in Jaipur to offer VASER liposuction.

Dr. Goyal prefers to utilize this approach for gynecomastia surgery since he is trained in high-definition sculpting to achieve the desired chest outlines. VASER also enables him to cut down on patient downtime, minimize the chance of irregularity and unevenness, and lower the risk of bruising. During the consultation, Dr. Goyal tailors the gynecomastia treatment to each patient's specific needs.

For five years, a 25-year male patient, Mr. Mukesh Choudhary from Sikar, suffered from male breast, i.e., gynecomastia. Previously, he lived in Pune, where he searched to get rid of this problem and found a YouTube video on Rejuvena Cosmo Care Channel that gives 100 % satisfactory results. But it was so far from Jaipur that Mr. Mukesh couldn't visit Rejuvena. But he had been watching videos for the last three months.

After some time, Mr. Mukesh came to Sikar, which is his hometown. Then, he contacted Rejuvena Cosmo Care. The patient said that he could feel fat under the chest area with the increased nipples and brown areola around the nipples. After consultation and thorough examination with Dr. Deepesh Goyal, the patient decided to go for gynecomastia surgery.

Dr. Deepesh Goyal performed the surgery employing VASER Ultrasonic Liposuction with gland excision. The surgery was completed as planned. Since the procedure was less invasive than traditional liposuction, the patient did not need an overnight hospital stay.

Checked for any seroma formation, which we never encountered at Rejuvena. The patient was prescribed post-surgery medications and was advised to take a rest of one to two days.

Feedback from the Patient

The patient said, “Previously, I felt less confident and concerned due to gynecomastia. Now, after undergoing surgery, I am happy with the smooth and predictable results. My recovery was fast, with minimal downtime. For me, VASER Liposuction had enhanced the results of my gynecomastia surgery by sculpting the chest and helping achieve the right shape and contours. Thank you, Dr. Deepesh and Team Rejuvena, for the amazing results.”

Enter details,our team would approach to help you as soon as possible.